(Phoenix, AZ) – Arizona Public Service Company (APS) has signed the UNITY Pledge in support of full inclusion and equality in employment, housing, and public accommodations for all Arizonans, including gay and transgender people. APS joins more than 20,000 individuals and over 3,200 businesses including PetSmart, AMR, American Airlines, the Arizona Diamondbacks, Fry’s Food Stores, and GoDaddy in supporting a fully inclusive Arizona.

Currently, five Arizona cities have ordinances that ban discrimination; however, Arizona has no statewide laws that protect people from being fired based on their sexual orientation or gender identity or discriminated against in housing and public accommodations. 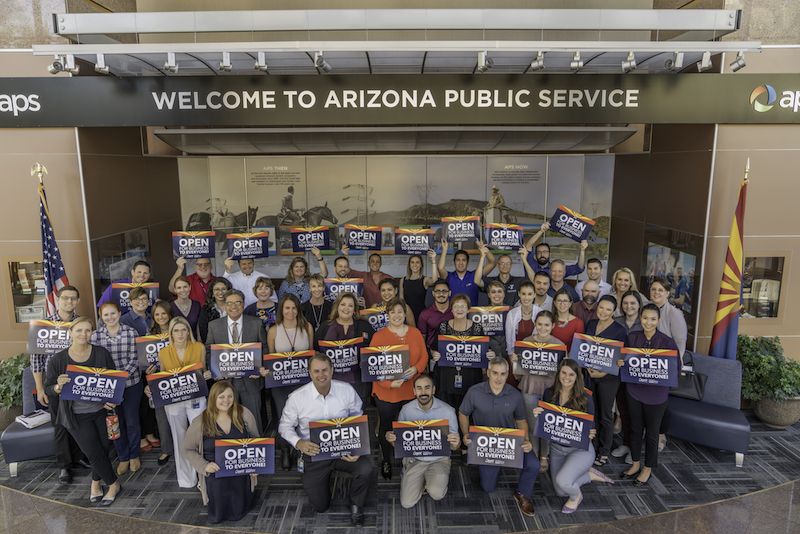 “APS is committed to fostering an environment that recognizes our employees’ unique needs and celebrates the value of diverse perspectives,” said Jeff Guldner, President of APS.  “Signing the UNITY Pledge is an extension of an APS core value: Respect & Inclusion.  We want all of our employees to know that we are proud to work alongside them and for the customers and communities we serve to know that we share the vision of a fully inclusive Arizona.”

“We are proud to welcome APS into the UNITY Pledge family are thankful for their recognition that all Arizonans deserve to be celebrated, respected and protected,” said ONE Community and ONE Community Foundation President and Co-Founder, Angela Hughey. “APS serves customers equally across Arizona, despite the fact that only five of our municipalities have equal protections.  APS understands that we are all stronger when we are all treated with fairness and respect,” concluded Hughey.

Created by ONE Community, the member-based coalition of socially responsible businesses, organizations and individuals moving diversity, inclusion and equality for all Arizonans forward, the UNITY Pledge is a public declaration to support and advance workplace equality and non-discrimination policies in housing and public accommodations for all Arizonans, including gay and transgender Arizonans.