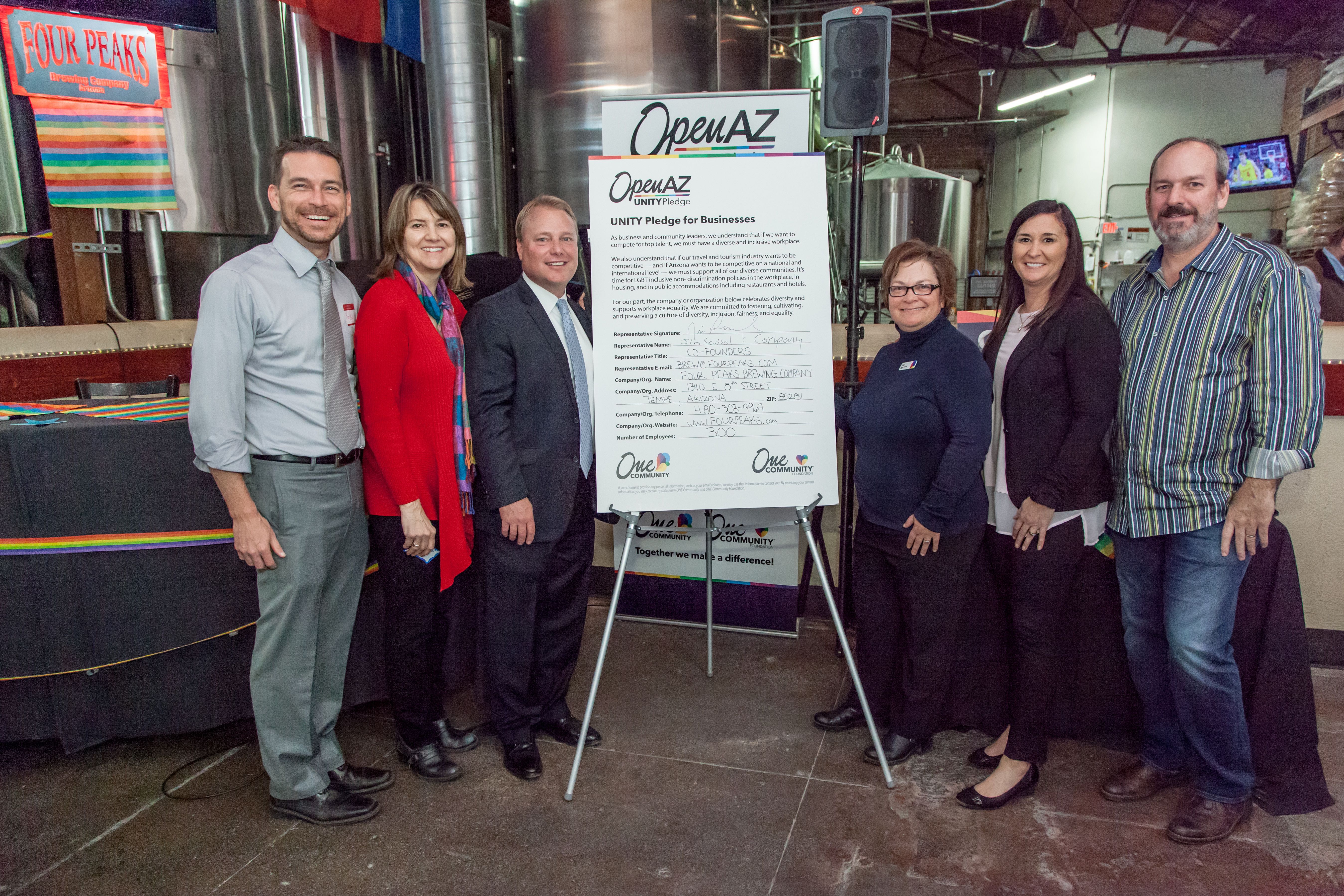 TEMPE, Ariz. (February 1, 2017) - Tempe-based brewery Four Peaks Brewing Co. signed the UNITY Pledge in support of fully inclusive non-discrimination policies in the workplace, housing, and public accommodations for all Arizonans, including individuals who are gay or transgender. The first Arizona brewery to sign the pledge, Four Peaks joins over 2,100 businesses and organizations including GoDaddy, Fry’s Food & Drug Stores, Yelp, Uber, Professional Firefighters of Arizona, PetSmart, and Coca-Cola in supporting a fully inclusive Arizona.

“We are proud to be an Arizona-born company that has welcomed all communities since we first opened our doors. We believe that good beer makes for good company and we look forward to continuing to welcome and support equality for all Arizonans,” said Jim Scussel, co-founder of Four Peaks Brewing Co.

“Four Peaks, like the City of Tempe, understands that if you want to be the best there can be no barriers to attracting top talent. Running a successful business is about serving all people, not just some people.  At their core, non-discrimination policies are rooted in the American values of fairness, equality and opportunity,” said Mark Mitchell, Mayor of Tempe.

While five municipalities have ordinances that ban discrimination, Arizona has no statewide laws that protect gay and transgender individuals from being fired or refused service, housing and public accommodations based on their sexual orientation or gender identity. To promote a fully inclusive Arizona, ONE Community, a member-based coalition of LGBTQ and allied individuals and businesses, created the UNITY Pledge: a public declaration to support and advance workplace equality and non-discrimination policies in housing and public accommodations for LGBTQ individuals and their allies in Arizona.

“We are thrilled to welcome our first brewery into our UNITY Pledge family,” said Angela Hughey, President of ONE Community. “Four Peaks Brewing Co. not only makes some of the best beer in the nation, but they are an economic engine and job creator for Tempe and the state of Arizona.  They understand that when we celebrate, respect and protect all who live in our great state, we all succeed,” concluded Hughey.