Maricopa Board of Supervisors Unanimously Supports Equality for all Arizonans

One Community  /  Sep 03, 2020 9:19 AM
Maricopa Board of Supervisors Unanimously Supports Equality for all Arizonans
Signs ONE Community’s UNITY Pledge in support of equal treatment in employment, housing and public accommodations

(Phoenix, AZ) – On Wednesday, September 2nd, the Maricopa Board of Supervisors signed the UNITY Pledge in support of full inclusion and equality in employment, housing, and public accommodations for all Arizonans, including LGBTQ people.

Maricopa County is currently the fastest growing and fourth largest county in the nation. It is also the first county in Arizona to sign the UNITY Pledge, joining over 20,000 individuals and over 3,300 businesses including GoDaddy, Yelp, American Airlines, the Arizona Diamondbacks, PetSmart, Fry’s Food Stores, and Coca-Cola in supporting a fully inclusive Arizona. 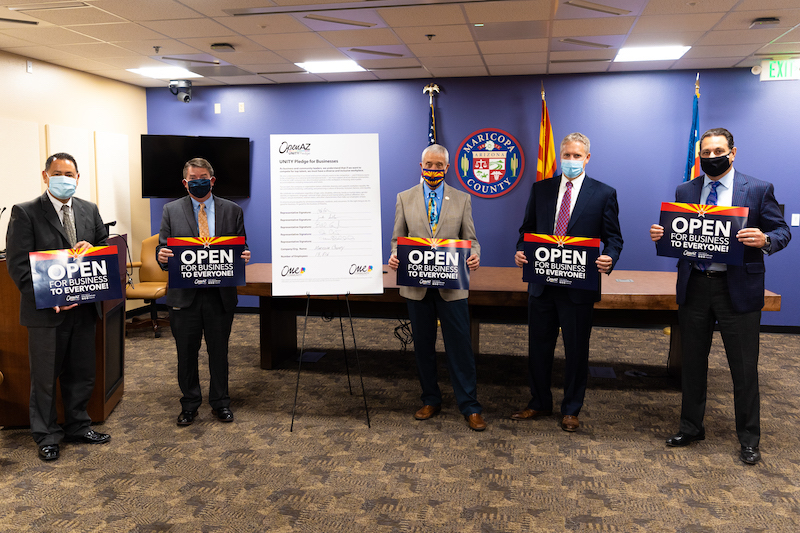 Currently, only five Arizona cities have ordinances that ban discrimination; however, Arizona has no statewide laws that protect people from being fired based on their sexual orientation or gender identity or discriminated against in housing and public accommodations.

“Signing the UNITY Pledge demonstrates that no matter who you are or who you love, you are welcome in Maricopa County,” said Supervisor Steve Gallardo (D) of District 5. “I am proud of today’s bipartisan vote.  Equality isn’t a red or a blue issue – it’s an Arizona issue,” concluded Gallardo.

I believe that it is incumbent upon leaders at every level, public and private, to make it clear that all people deserve to be treated with respect and dignity” said Supervisor Sellers of District 1. “Today’s public declaration of support for the Unity Pledge is one step in our drive for equality, but how we serve our residents every day proves the County’s commitment to that goal.”

“I am proud to join my colleagues in the signing the UNITY Pledge,” said Supervisor Bill Gates (R) of District 3. “Supervisor Gallardo’s leadership on LGBTQ issues is something I admire, and I am proud to stand by him today declaring that Maricopa County, the fourth largest county in the country, is an inclusive, welcoming place to live, work, and play.”

“We are proud to welcome Maricopa County into the UNITY Pledge family,” said ONE Community and ONE Community Foundation President and Co-Founder, Angela Hughey. “Maricopa is as diverse as it is large and today’s vote represents our community’s culture and values,” concluded Hughey.

Created by ONE Community, a member-based coalition of socially responsible businesses, organizations and individuals who support diversity, inclusion and equality for all Arizonans, the UNITY Pledge is a public declaration to support and advance workplace equality and non-discrimination policies in housing and public accommodations for all Arizonans, including gay and transgender Arizonans.