The Phoenix Suns have become the first NBA team to sign the UNITY Pledge in support of full inclusion and equality in the workplace, housing, and public accommodations for all Arizonans, including gay and transgender people.   The Phoenix Suns joins over 1,500 businesses and organizations including the Arizona Diamondbacks, San Francisco Giants, Frys Food & Drug Stores, GoDaddy, Professional Firefighters of Arizona, PetSmart, Yelp and Coca-Cola in supporting a fully inclusive Arizona.

Currently, five municipalities have ordinances that ban discrimination; however, Arizona has no statewide laws that protect gay and transgender individuals from being fired based on their sexual orientation or gender identity, or discriminated against in housing and public accommodations.

“We are dedicated to the principle of treating everyone as equals,” said Suns president, Jason Rowley. “With the signing of the UNITY Pledge, we aim to publicly show support of our diverse community,” concluded Rowley.

Created by ONE Community, a member based coalition of LGBTQ and allied individuals and businesses; the UNITY Pledge is a public declaration to support and advance workplace equality and non-discrimination policies in housing and public accommodations for LGBTQ individuals and their allies in Arizona.

“We thank the Phoenix Suns for standing up for equality, and understanding that fully inclusive non-discrimination policies are not only the right thing to do, but also enhance the quality of life for everyone in our great state,” said Angela Hughey, President of ONE Community.  “No matter who you root for, everyone deserves the opportunity to work hard and provide for their families and those they love,” she added. 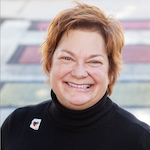